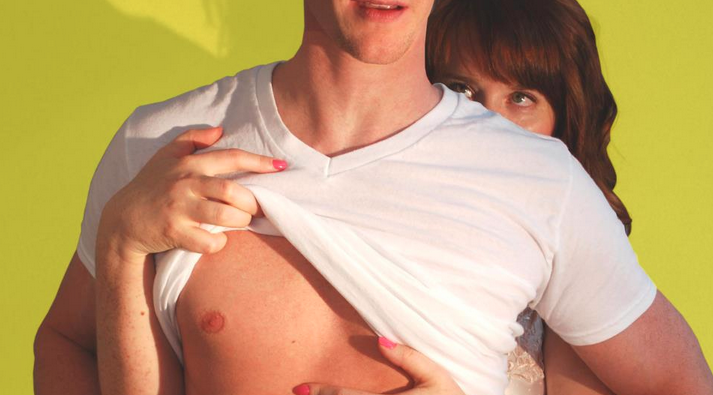 For those of us whose first sexual experiences took place in childhood bedrooms, high school bathrooms, and community swimming pools, the people who choose to remain abstinent seem like members of some kind of reverse freak show, where everyone is fascinatingly boring.  Just as foreign as the bearded lady or the conjoined twins is the clean-cut, Jesus loving boy whose cool smile and perfectly parted hair reveal none of the inner turmoil of virginity.  This is the draw of Do Me a Little, Marissa Kohn’s tragic and often funny new play about the first night of marriage between two Mormons, Brigham (Trey Gerrald), a closeted homosexual, and Mandy (Ms. Kohn), an overweight girl who had been written off as an old maid at twenty-seven.

Stephen Fry once joked, “The only people who are obsessed with food are anorexics and the morbidly obese, and that in erotic terms is the Catholic Church in a nutshell.”  The same could be said for the Mormon Church, and these two kids, entering an appropriately childish pirate-themed honeymoon suite, quickly learn how little they are able to know about each other when sex is forbidden.  For their entire lives, their friends, relatives, and priests have hammered into them that it is a sin, and now, all of a sudden, it is a divine act of creation.  And it is not so much that they haven’t had sex but that they haven’t talked about it—sex isn’t even the answer, it’s the key.  Mandy comes armed with fists full of kinky toys, but even the Kama Sutra can’t help when they don’t understand their own sexuality.  In Mormon doctrine, there is no such thing as a “homosexual,” only “homosexual acts.”  Since Brigham has never slept with a man, he doesn’t consider himself gay—he just has certain “thoughts” and “feelings.”  But it is even more complex than that, because he is attracted to Mandy as well.  In a world that is dominated by dualities—good vs. evil, God vs. Satan—the notion that sexuality is a spectrum and not a binary is unthinkable.

The Fringe Festival is notorious for epitomizing the worst about small-scale theater, but Do Me a Little proves a nice discovery.  Both Mr. Gerrald and Ms. Kohn bring a wonderful sensitivity to their roles, and the script avoids the kind of divisive polemics we might expect from a play packed with such political subjects.  At one point, Brigham recalls being on his mission, free of all the pressures of dating and marriage.  The heat is unbearable, so he and his friend Travis remain undressed all day.  Travis speaks lovingly about his girlfriend, gets an erection, and begins masturbating, unable to control himself.  Brigham joins in, and the two reach their climaxes at the same time.  For these characters, so worn down by false and insidious propaganda, this is a gorgeous moment, rich with sexual honesty.  Mormonism, of course, is a hot subject right now, and as Mitt Romney continues to avoid talking about the church that raised him, it is refreshing to see two Mormons on stage treated with this kind of affection and sophistication.

Do Me a Little runs through August 25th at the The First Floor Theatre at La MaMa as part of the New York International Fringe Festival.  74A E. 4th Street  New York, NY.