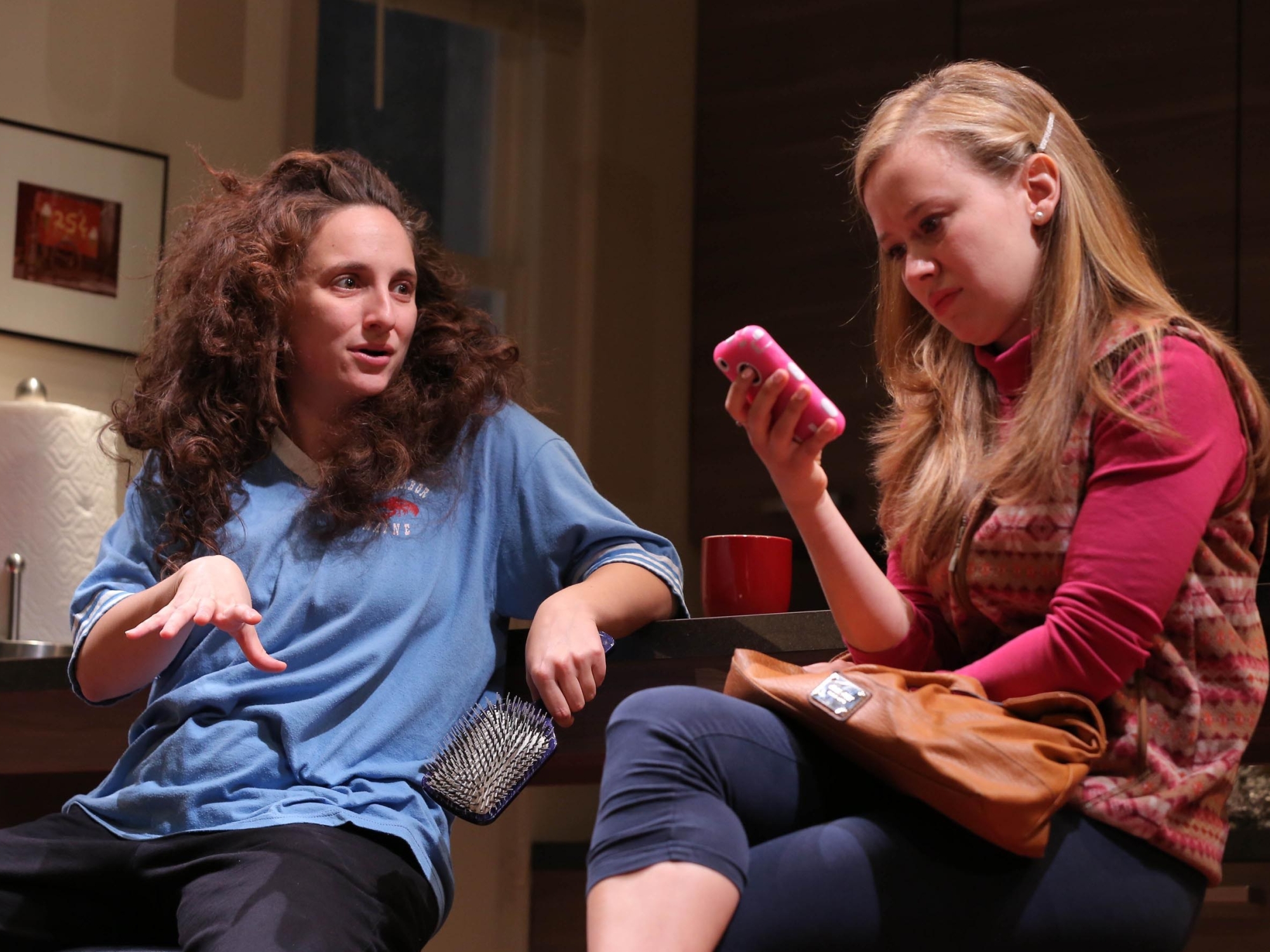 Being a Jew is exhausting.  There’s the self-loathing, the guilt, the language (which doesn’t even use Roman letters), and—for those of us born after 1948—the inescapable identification of Jewishness with Auschwitz.  Even the question of what it means to consider oneself a Jew is too complex for any reasonable person to try to answer completely.  But Joshua Harmon’s hysterical, brilliant play Bad Jews at least holds a mirror up to the modern iteration of the tribe and challenges everyone from the self-righteous Zionist to the bacon-eating secularist.

“We’re no arguing, we’re talking,” Daphna (Tracee Chimo) says, quite sincerely, about halfway through Bad Jews.  This is after she has lectured Delawarean Melody (Molly Ranson) on her ethnic heritage and—simply because Melody is a shiksa from the Midwest—accused her of being complicit in the genocide of Native Americans.  You know, talking.  Melody’s boyfriend Liam (Michael Zegen) is Daphna’s cousin and the three of them, along with Liam’s brother Jonah (Philip Ettinger), are all sleeping in an apartment on the Upper West Side while preparing to sit shiva for Poppy, the Holocaust surviving family patriarch.  Daphna is a senior at Vassar who loves pronouncing the Hebrew letter chet and plans on making aliyah after graduation—as Liam puts it, she parades around like both a “rabbi in the making” and an “Uzi-toting Israeli warlock superhero.”   Liam, on the other hand, has almost completely assimilated and relishes not keeping kosher on Passover so he can announce that he is a “bad Jew.”  Jonah, the quiet punching bag for these two extreme personalities, sits and watches as Daphna and Liam tear each other apart over who will inherit their grandfather’s Chai.

I doubt a single Jew could not see a little of his or herself in Bad Jews.  Mr. Harmon’s script is sharp and is unrelenting in its criticism of both the politically liberal “uber-Jews” who ignore the uncomfortable aspects of the religion (for example, its misogyny) and the gentile wannabes who are respectful of all customs and traditions except their own.  In a paraphrase of one of David Mamet’s central arguments in The Wicked Son, Daphna shouts at Liam, “If you found yourself in the middle of a rain dance you would be so respectful trying to do every movement perfectly to like honor every Native American who ever lived, but if you found yourself in the middle of a hora—I’ve seen you in the middle of a hora—you look like you want to fucking die.”

Ms. Chimo is absolutely fantastic here—she stomps around the apartment adjusting her sweatpants, which always seem to get stuck in either her crotch or her butt crack, and combing her explosion of corkscrew hair without any sense of how she appears to others.  Daphna is one of these people who is so sincere in her insincerity that she is the only one who doesn’t realize the image she presents of herself is a lie, and Ms. Chimo expertly avoids the temptation of reducing her to a simple harpy Jewess, giving her moments of self-realization a weight they would not have if the character were played only for laughs.  Meanwhile, Mr. Zegen is consistently detestable as Liam, and Mr. Ettinger, who doesn’t speak much, follows the action with such facial precision that one can often measure the tone of a scene by watching his reactions.

Admittedly, Bad Jews isn’t for the lighthearted.  It draws a great deal of blood, but it gets away with its attacks because it is so damn funny.  This is the best depiction of contemporary Jewishness since Kinky Friedman’s “We Reserve the Right to Refuse Service to You.”