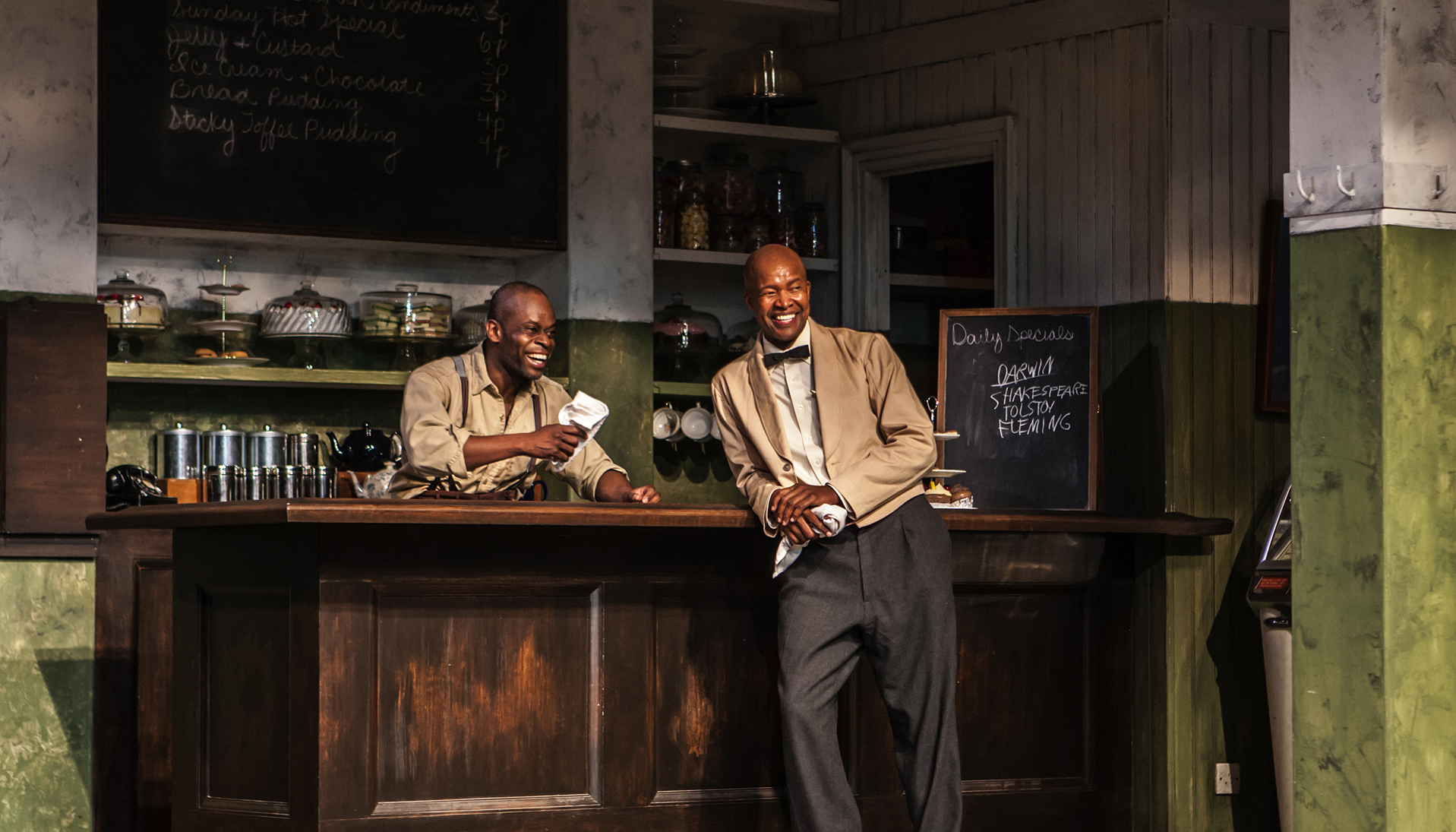 In taking the reigns and directing this one-hundred-minute production of Master Harold … and the Boys, Athol Fugard reminds audiences why this play is considered his masterpiece. Mr. Fugard paints a picture that is sharp enough to penetrate life far outside the small shop’s rain-splattered windows. Mr. Fugard’s portrait of a white boy and two black men in a South African tearoom has enough depth to latch onto the institutionalized worldviews that persist beneath both that drowsy 1950s afternoon and a cool November evening in New York City.

Master Harold (Noah Robbins), more frequently referred to as Hally, possesses the cringe-inducing combination of being supremely confident and tremendously unaware of fundamental truths that rest right under his nose. Sam (Leon Addison Brown), an older Black man who has worked for the family since Harold was a boy, is intensely aware of his surroundings, an awareness that fuels his delicate caution while tending to Harold. At several points, when the audience hears about Harold traipsing through life unaware of the full implications of his racial position only to hear Sam recount his more grounded version of their shared history, Mr. Fugard forces the audience to wonder whether his characters even lived on the same planet.

This contrast in worldview is most concretely illustrated when Sam tells Harold how he empathized with the boy when he assisted Harold’s drunken father getting home from a bar. “A crowded Main Street with all the people watching a little white boy following his drunk father on a nigger’s back,” Sam said to Harold. “I felt for that little boy.” Sam reminds a perplexed Harold why, after making Harold a kite to assuage the embarrassment of his father’s public drunkenness, he could not join Harold on the bench that read “Whites Only.” Sam tells Harold that he was “too young” to notice at the time, “but not anymore.” Sam tells Harold that he should know better now, a moment that harkened the message behind today’s Black Lives Matter movement; “not anymore,” the activists promise, “will we let society forget that black lives matter.”

On top of drawing attention to this persistent contrast, Mr. Fugard reminds audiences of why it persists, how society can pretend racial conflict does not exist or that it is being sufficiently addressed. Mr. Fugard is aware that race is a divide that white people in privileged positions forget about and mask with declarations that suggest they have moved beyond. Harold, in an intellectual moment, proclaims, “I oscillate between hope and despair for this world as well, Sam. But things will change, you wait and see. One day somebody is going to get up and give history a kick up the backside and get it going again.” Proclamations that Obama’s victory in 2008 had ushered in a post-racial society mirror Harold’s intellectual self-assurance and its fragility in masking a persistent and ingrained emotional drive.

In the same week this production of Master Harold opened, a play about a young and intelligent South African breaking emotionally and unleashing a torrent of racial hatred, we saw the United States forfeit eight years of intellectual assurance that we had moved beyond race with the election of a candidate whose platform relied on race-baiting. That result, and the pointed reminder to many Americans that we had not moved on, left many calling, like Sam, to “hope for better weather tomorrow”; the result likely left many, like a dejected Harold, responding, “I don’t know. I don’t know anything anymore.”