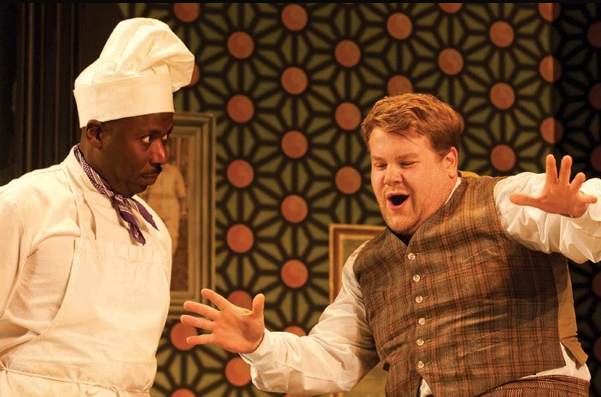 To paraphrase Alexander Pope, Richard Bean’s One Man, Two Guvnors is what we oft have seen, but ne’er so well—for the most part, that is.

This farce, based on Carlo Goldini’s The Servant of Two Masters, centers on Francis Henshall (James Corden), a man whose main preoccupations are food and sex.  The plot, of course, is only secondary, but rather roughly, here it is: Henshall’s “guvnor,” Rachel Crabbe (Jemima Rooper), is a lovesick woman disguised as her murdered twin brother, Roscoe, searching in Brighton in 1963 for Sebastian Stubbers (Oliver Chris), her presumptive fiancé and the man responsible for Roscoe’s death.  As she only pays Henshall at the end of each week, and he hasn’t eaten for many hours, he weasels his way into the employ of Sebastian, his second “guvnor”—naturally, he tries desperately to keep the two from finding out about each other, thus preventing their romantic reunion.  Finally, there is Pauline Clench (Claire Lams), who was betrothed to Roscoe but has fallen in love with a pretentious actor, Alan (Daniel Rigby).  Unfortunately, until Rachel and Sebastian are able to find each other and flee to Australia, she is forced to believe that she will be given away to the woman in drag.  The scenes are rather delightfully linked by a band playing skiffle.

One Man is written in the style of movies like Bananas and Airplane—Mr. Bean throws everything at the wall and sees what sticks.  Often, this leads to some terribly unfunny moments.  Alan, in particular, with his exaggerated posturing and histrionic emotions, is a riff on an old type and does nothing to improve it.  For a better example, think of Annie Hall’s old lover who asks her in perfect solemnity, “Touch my heart.  With your foot.”  There are also a few too many jokes along the lines of, “I must think of something boring, like—like Canada!” or, “First names are for girls and Norwegians.”  Still, for each clunker there is a hit: “What’s a nemesis?” “Dunno.  Definitely foreign.  I think it might be a Toyota.”  Mr. Chris, too, is fantastic as the prep school Britisher who you half-expect to end sentences with, “What, what!”  And there is almost no need to wax poetic about Mr. Corden, who by this point has been universally praised for his performance.

But it should be mentioned that it is the “unscripted” moments during which he—and the rest of the cast—are most successful.  Mr. Corden often breaks character to directly address the audience, sometimes even anecdotally (“I should say, we’ve done this show like four hundred times and this has never happened”).  The style, especially in a comedy like this one, can be frequently obnoxious, the actors giddily cracking up at their own jokes and ignoring the fourth wall as if they were extremely clever, the first to ever think of doing this (see Peter and the Starcatcher).  But Mr. Corden handles it with wonderful ease, and his own personality is often more charming and amiable than his character’s.  At the performance I attended, while Henshall moans about his hunger, pleading for food, he got a response from the audience—someone offering a “hummus sandwich.”  Mr. Corden, chuckling, asked him, “You know you’re in the theater, right?  You know that these are not real questions?  What are you going to do when you go see War Horse?  Bring carrots?”  Whether or not these moments are improvised or staged doesn’t really matter, because he imbues them with a sense of genuineness and spontaneity.  This is a truly impressive entertainer, someone always on his toes, always ready to make the play funnier, like a kind-hearted stand-up comedian with an expertise in handling hecklers.  Moments like these, I think, are among the best arguments around for live theater.