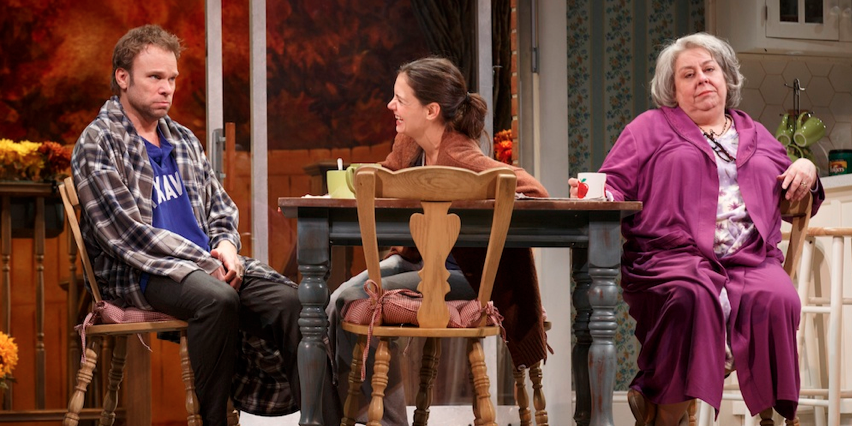 Theresa Rebeck will never write an American masterpiece, but she certainly has a talent for entertaining, low-stakes plays.  Though her subjects are ostensibly serious—last year’s Seminar dealt with the creative process, this year’s Dead Accounts with finance and religion—her shows are best appreciated as lowbrow highbrow theater, as well-written, well-executed fluff.

Dead Accounts opens with Jack (Norbert Leo Butz), an account working at a large bank in New York, returning to the home of his mother, Barbara (Jayne Houdyshell), in Cincinnati.  While inhaling Ohio ice cream, he raves to his sister, Lorna (Katie Holmes), about the superiority of the Midwest to the East Coast; in fact, Jack’s speech could rarely be defined as anything but “raving.”  His mouth is like a machine gun and his body underscores his (apparently) coke-fueled dialogue with equally energetic gesticulations.  As the days pass, and as Jack wolfs down an endless number of Coney Island dogs and pepperoni pizzas, it is revealed that he has fled his estranged wife, Jenny (Judy Greer), after she discovered that he stole $27 million from his employers.  Meanwhile, his father is notably absent, bed-ridden by an excruciating kidney stone.

As might be expected, Ms. Rebeck gives in to the temptation to proselytize: by the second act, Lorna condemns the evils of big banks and equates religion with money, but pitching these ideas to a New York audience is a bit like telling the pope about the power of Jesus to save.  We didn’t need the showrunner from Smash to inform us that Dick Fuld is a bad guy.

Still, when it is not swiping at profundity, Dead Accounts is a fairly enjoyable play.  Jack’s satirizing of both New York elitism and Middle America naiveté is consistently funny.  In perhaps the play’s best moment, he tells Lorna that people in the East think people in the Midwest are stupid because, “We still think you have to go to jail for stealing.”  And Mr. Butz is a terrific performer, ideally cast.  He has an athletic, manic charm that always keeps the action engaging—he is like a tornado with ADD, standing on tables, rolling on the floor, and shrieking at the least provocation.  It is no surprise, of course, that Ms. Holmes is terrible.  She delivers her lines as if she is expending all her energy in remembering them and none of it in acting; it is the kind of performance we often see from an average high school drama student.  Still, she is not conspicuously bad, like many Hollywood transplants.  Hers is an inoffensive, if inadequate, presence, and one that is outshined by her worthier co-stars.  Ms. Houdyshell, for example, has an honest, endearing tenderness.  Barbara is the type of woman who knows exactly what you think of her Catholicism and doesn’t care one bit.  It gives her peace and that is all that matters, especially when you have a felon for a son and a husband who is in the hospital.  Besides, you can get back to her about your own life philosophy when you’ve had six children.

Dead Accounts will be forgotten almost as soon as it closes, but it is nonetheless a perfectly acceptable way to pass two hours this winter.