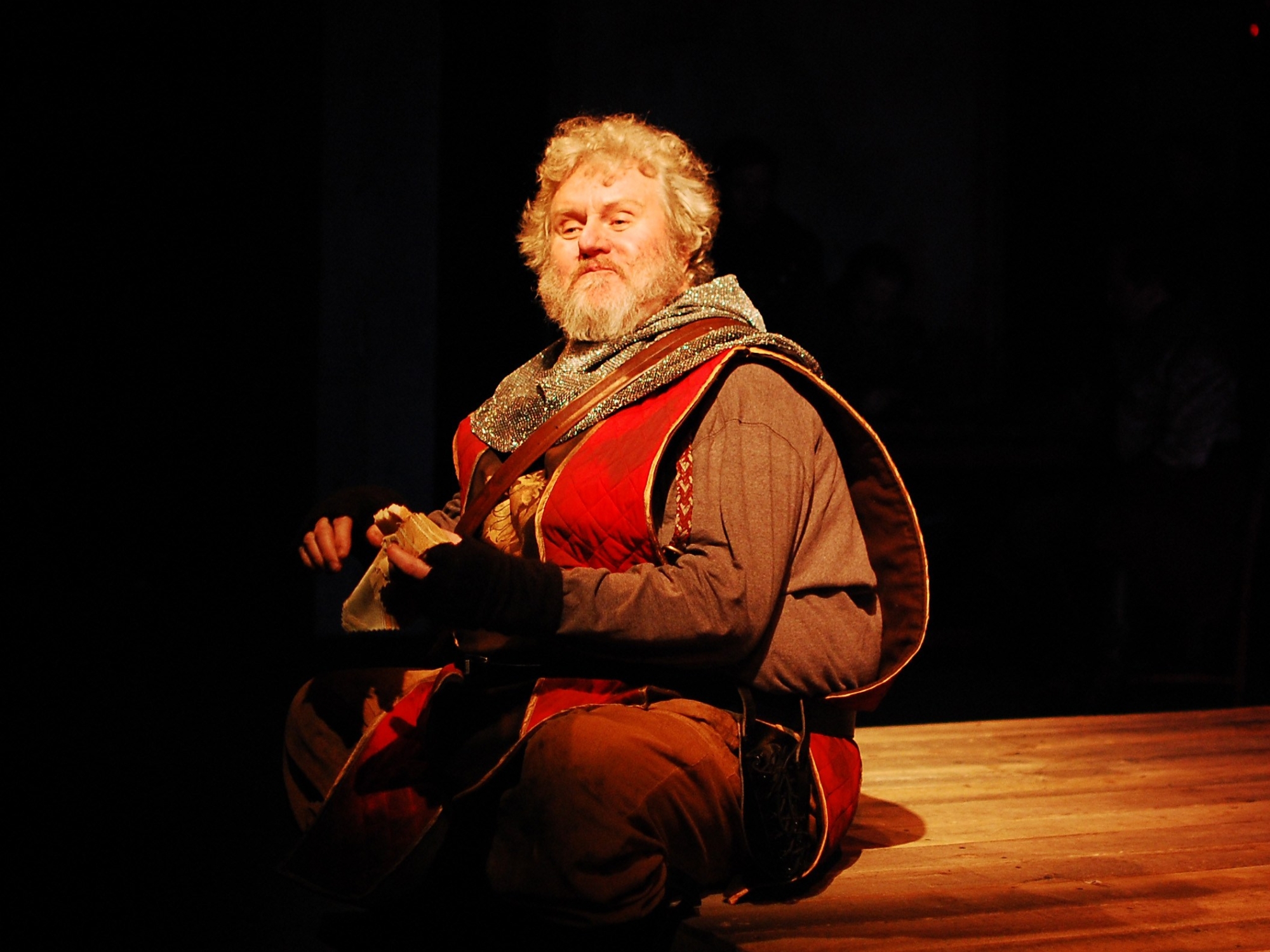 Last season, the Pearl produced an excellent Richard II, and this year they are continuing the Henriad with an admirable Henry IV, Part 1.  Shakespeare’s histories have never interested me as much as his comedies and tragedies, but Henry IV blurs all three genres and, through Falstaff (Dan Daily), becomes a kind of historical tragicomedy, elevating it above works like Richard III or Henry V.  Falstaff is a difficult character—universally beloved, he is too often played as a buffoon instead of a fellow of infinite jest, a wit that even surpasses Shakespeare’s other great clown, Feste.  His cowardice, a source of endless amusement to Prince Hal (John Brummer) and his drinking buddies, in fact proves a heroic foil to the silly, posturing valiance of royalty who are willing to sacrifice their lives to meaningless feuds.  “I like not such grinning honour as Sir Walter hath: give me life,” he declares towards the end of the play.  Like Joseph Heller’s Yossarian, Fat Jack, counterfeiting death to get out of battle, smoking cigars, and swinging back sack, transforms cowardice, gluttony, and drunkenness into a virtue.

Mr. Brummer and Mr. Daily do well as Hal and his father figure.  During a key scene, in which Hal and Jack rehearse a meeting between the prince and the king, Falstaff imitates Henry IV, indirectly praising himself: “A good portly man, i’faith, and a corpulent; of a cheerful look, a pleasing eye and a most noble carriage; and, as I think, his age some fifty, or, by’r lady, inclining to three score.”  Hal takes a turn playing his father, and his joking response—“There is a devil haunts thee in the likeness of an old fat man … Why dost thou converse with that trunk of humours … that swollen parcel of dropsies … that stuffed cloak-bag of guts … that vanity of years?”—elicits troubled laughter from Falstaff.  His repetition of the lines, “Banish not him thy Harry’s company, banish not him thy Harry’s company” (a foreshadowing of Hal’s rejection) is absolutely heartbreaking, and the sharp balancing act of tones—lightly comedic, darkly comedic, tragic—is expertly handled by these two actors.

As with any production of Henry IV, Part 1, the play drags when Fat Jack is offstage, and the bickering of kings and their adversaries eventually becomes tedious.  Still, this is a faithful, intelligent rendering—and it is pure delight to watch as Mr. Daily strokes his gorged belly, acts out impossible scenes of courage, and revels in the simple but hedonistic pleasures that his life affords him.

Also: the Pearl is currently having serious financial trouble.  If you can, toss some coin their way.