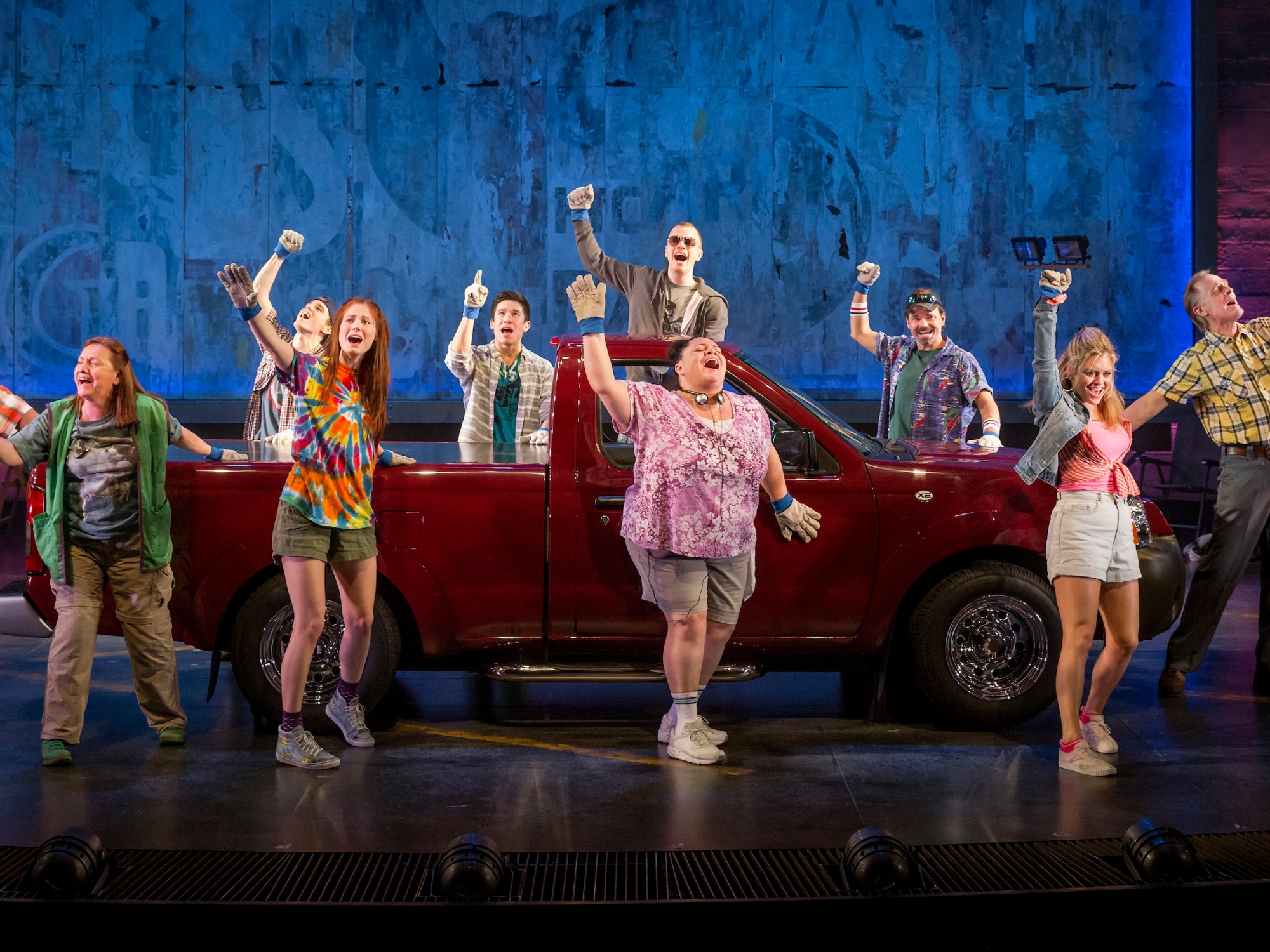 In Longview, a man’s truck is like his ten gallon hat.  So it should be no surprise that every year, a group of out-of-luck Texans compete to keep their hands on a truck—whoever removes his or her hand last gets to take the truck home.  Hands on a Hardbody, based on S.R. Bindler’s documentary, is a kind of modern day They Shoot Horses, Don’t They? in which the pursuit of the American Dream becomes a carnivalesque parade of poverty.  But unlike They Shoot Horses, there is no despairing note to this musical: here the dream is tangible, the spectators admiring, and the participants heroes.

The cast is a panoply of the white, lower middle-class experience.  There are, among others, Benny Perkins (Hunter Foster),the 1992 champion whose divorce left him without his wife and without the truck he won the first time around; J.D. Drew (Keith Carradine), an elderly man who is struggling to pay his bills; Norma Valverde (Keal Settle), a woman who has placed her victory in the hands of God (“Oh Lord, won’t you buy me a Nissan pickup?”); Heather Stovall (Kathleen Elizabeth Monteleone), who is willing to use her sexuality to try and rig the contest; Greg Wilhote (Jay Armstrong Johnson), a tight-lipped marine just back from war; and Chris Alvaro (David Larsen) and Kelli Mangrum (Allison Case), two teenagers who plan to win and run off to Hollywood.  As time goes by, the group form friendships and swap life stories, this budding closeness leaving the contestants with mixed feelings about each successive loser.

Indeed, Hands on a Hardbody is so attached to its cast that it doesn’t want to let any of them go—it is only right before intermission that characters start to drop off.  And yet, with ten leads, this doesn’t leave the writers with much time for depth; instead of narrowing in on just a few, the script sprinkles its attention evenly, leaving us with a lack of interest in anybody.  In the documentary, we were given nice, small moments that helped quickly develop empathy: J.D., the oldest contestant, smiles at the camera and tells us he’s always smoked unfiltered cigarettes, or Benny, the de facto expert, misquotes Highlander in his analysis of the competition (“In the end, there can only be one”).

Onstage, Hands on a Hardbody is all gloss, not the ideal coating for its subject matter.  Don Curtis (William Youmans), husband of contestant Janis (Dale Soules), provides a telling example—he decides to stay up as long as she does, effectively meaning they will be in the competition together.  This is an obvious relationship for a musical to cling to, but in the Mr. Bindler’s film, Don is missing most of his bottom teeth and wears a hand-made cardboard hat that reads “I Love You JANis! GO BABY GO!”  There is something uncomfortable if not downright condescending about the absence of these touches in the musical, as if we can only view poverty through Broadway’s rose-tinted glasses.

In 2005, the competition was briefly halted after one of the contestants broke into a Kmart and committed suicide with a shotgun.  This, to me, is more illuminating, more indicative of what is going on in Hands on a Hardbody than anything you see in the show.  The suffering of the characters, and of the millions of people they represent, will not be heard this spring over the sound of forgettable musical numbers belted out in the Brooks Atkinson Theatre with little feeling and even less meaning.