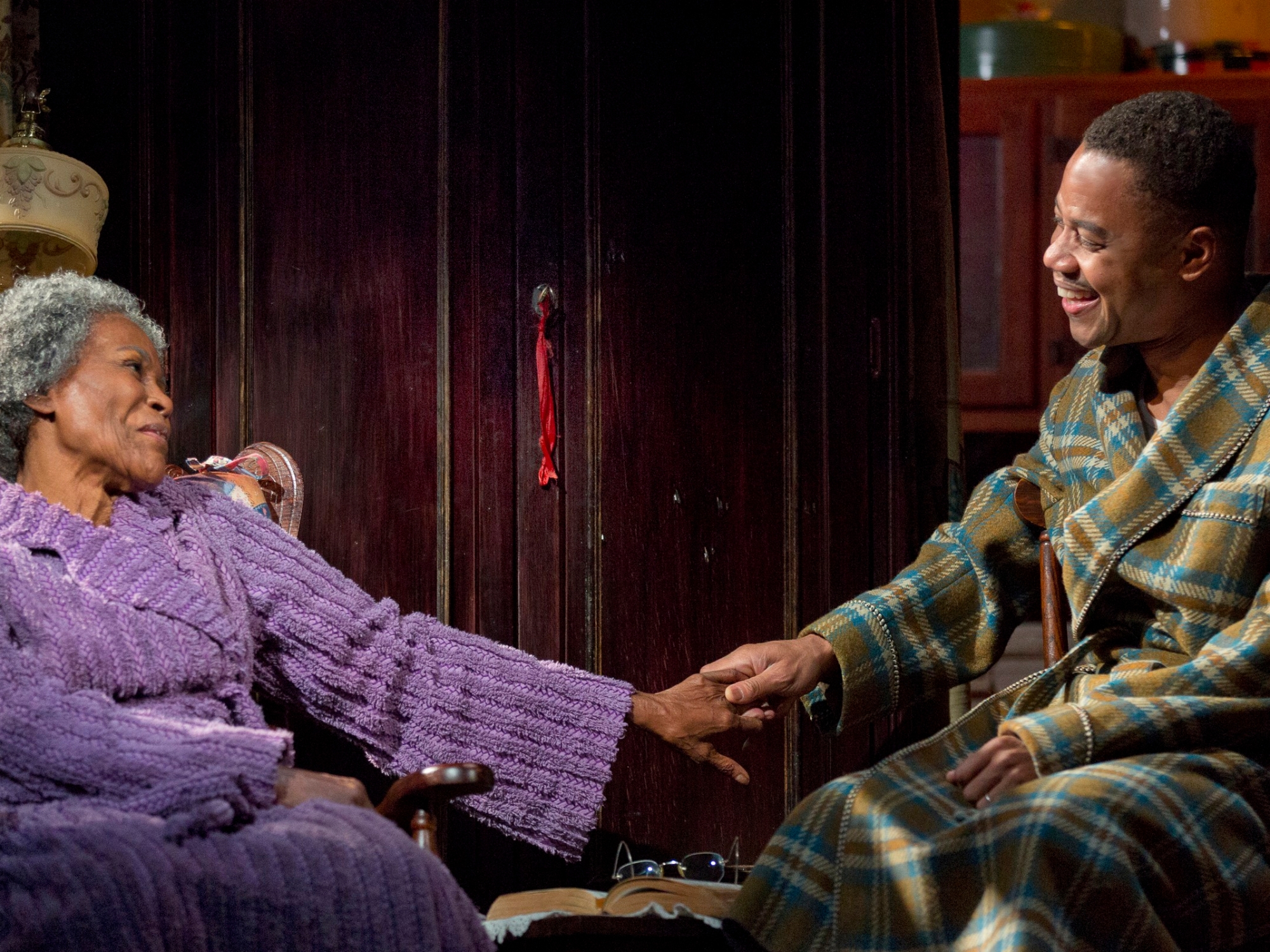 The emotions are easy and the pleasures simple in Horton Foote’s The Trip to Bountiful—but they are emotions and pleasure nonetheless.  Mrs. Carrie Watts (Cicely Tyson), an elderly woman who seems to feel “Death [standing] in the doorway, clipping his nails,” as Ken Cosgrove would put it, desires to leave the house of her docile son, Ludie (Cuba Gooding Jr.), and his bitchy wife, Jessie Mae (Vanessa Williams), in order to return to her hometown, the ironically named Bountiful.  In Houston, she stays up all night staring out her window and watching cars as they narrowly avoid crashing into each other on the corner.  She sings Christian hymns, much to the chagrin of the beauty parlor and moving picture-obsessed Jessie Mae, while not-so-secretly longing to have dirt once again between her fingers.  One day, pension check in hand, she bolts, and Foote’s drama follows the stubborn but genial Mrs. Watts during her “trip” to her dilapidated childhood house, which is “about to fall into the Brazos river.”

The biggest reason to see Bountiful is Ms. Tyson, whose performance is addictively amiable; in the racially segregated South, she manages to charm Black and white characters alike, inspiring friendship from a young woman on a bus (Condola Rashad) and charity from a local sheriff (Tom Wopart).  There is never any manipulation in her actions—her thorough embodiment of Christian virtue is simply contagious, and most seem to come to the realization that it feels good to be good.  Mr. Gooding, usually a benign presence at best, uses his innocuousness to his advantage, and his gentle handling of warring mother and wife is surprisingly affecting—furthermore, his boyish demeanor suggests a suffering beneath the surface, something I have never seen from the actor.  Ms. Williams, too, is fine, though her role demands little more than soliciting boos from the audience.

True, Bountiful is old-fashioned in its sensibility—a decidedly less saccharine How Green Was My Valley.  Written originally as a TV movie with an all-white cast in 1953, this color-crossing adaptation could be stepping in questionable territory; where is the Klan, or the arch-conservative Governor Allan Shivers, who three years later, in response to Brown v. Board of Education, would encourage angry segregationist mobs who were burning three black-faced dummies in front of Mansfield High?  Director Michael Wilson’s only acknowledgement of the situation seems to be an inconspicuously placed COLORED ONLY sign in a Greyhound bus station.

And yet, the result is somehow inoffensive; this is a white man’s fantasy of the South, but one that shouldn’t tread on too many toes.  With gorgeous backdrops that evoke Edward Hopper’s America and with a cast of characters whose concerns are personal instead of political, the vicious, institutional racism of the era seems secondary to more universal problems.  “The passing of time makes me sad,” Mrs. Watts says early in the play.  From her, this cliché becomes oddly poetic.  Bountiful, emptied of all its former inhabitants, is itself a fantasy.  “Exit Ghost,” a Shakespearean stage direction that became the title of Philip Roth’s final Zuckerman novel, could very well apply here: running instead of walking, this athletic octogenarian is preparing for her next, even bigger trip.