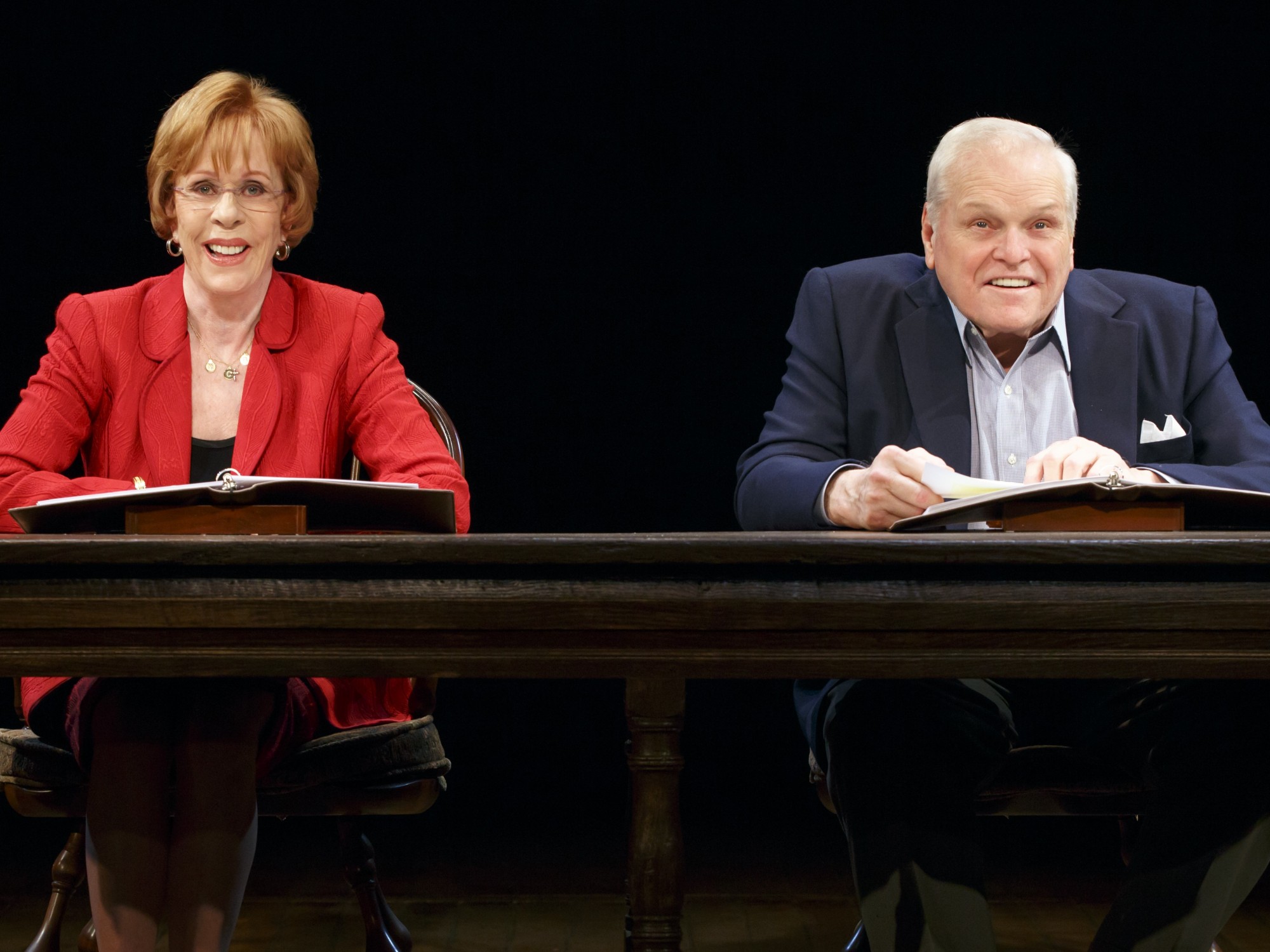 A.R. Gurney’s Love Letters cannot help but sound slight.  The entire play consists of letters being read aloud by Andrew Mackepeace Ladd III (Brian Dennehy) and Melissa Gardner (Carol Burnett), two upper-class WASPs whose friendship begins in elementary school and continues into middle age.  Andy is straight-laced and academically successful; he unquestioningly inherits his life philosophy from his father, is somewhat intimidated by sex, and his career takes him from Yale to the Navy to law school and finally to the U.S. Senate.  Melissa is artistically inclined and emotionally unstable, a girl who gets caught smoking cigarettes in school and a woman whose paintings are described by her critics as “anarchistic.”  Though they never marry, the love between Andy and Melissa is the one constant in their lives, and their letters allow them to articulate experiences that might otherwise remain unexamined.

But this kind of synopsis does not do justice to Love Letters, which despite its gimmicky premise and its seemingly boring characters does a remarkable job of tracing the melancholy of the passage of time.  In fact, it benefits from Andy and Melissa’s ordinariness—more interesting people might not allow us to realize that any life scrutinized over a period of fifty years is rich with drama: the influence of small choices is felt for decades; the possibility of happiness is destroyed by bad timing.  Mr. Gurney, while occasionally lapsing into grandiose soliloquies on the pleasures of writing, usually makes the most of his form.  Early in the play, for example, while the two characters are still in school, a series of frenetically exchanged messages culminate in Andy and Melissa reciting in unison, “I will not write personal notes in class.”  There are also some powerfully conspicuous gaps in the cookie-cutter Christmas cards Andy sends to Melissa about his wife, children, and dog.  And even if they are stereotypes of the East Coast elite, the two are capable of wit and self-reflection: a night of passion is rendered by Andy as “two old WASPs going at it like a sale at Brooks Brothers.”

The cast of Love Letters will change several times in the coming months, with Alan Alda, Stacey Keach, and Martin Sheen replacing Mr. Dennehy, while Ms. Burnett’s part will alternately be taken by Candice Bergen, Diana Rigg, and Anjelica Huston.  Mr. Dennehy, who I usually find underwhelming, is ideally cast here.  He has an old New England physicality that suits Andy, and it is easy to imagine him running as a Republican Senator for no other reason than that is what good Yalies do.  Ms. Burnett is fantastic in Melissa’s early years—her delivery is appropriately exaggerated, her voice nicely squeaky—and she has the right tone in her terser letters: “I was married.  I’m not now.”  But we don’t fully see her transition into true instability, and as a result Melissa’s mental illness is never clearly indicated.

There would be little difference between, say, a benefit reading of Love Letters and a full-scale Broadway production.  Indeed, I went in expecting something flavorless and forgettable.  Instead, I found a work that is charming, deceptively simple, and cathartic.  It would be a shame to underestimate and therefore miss Love Letters.