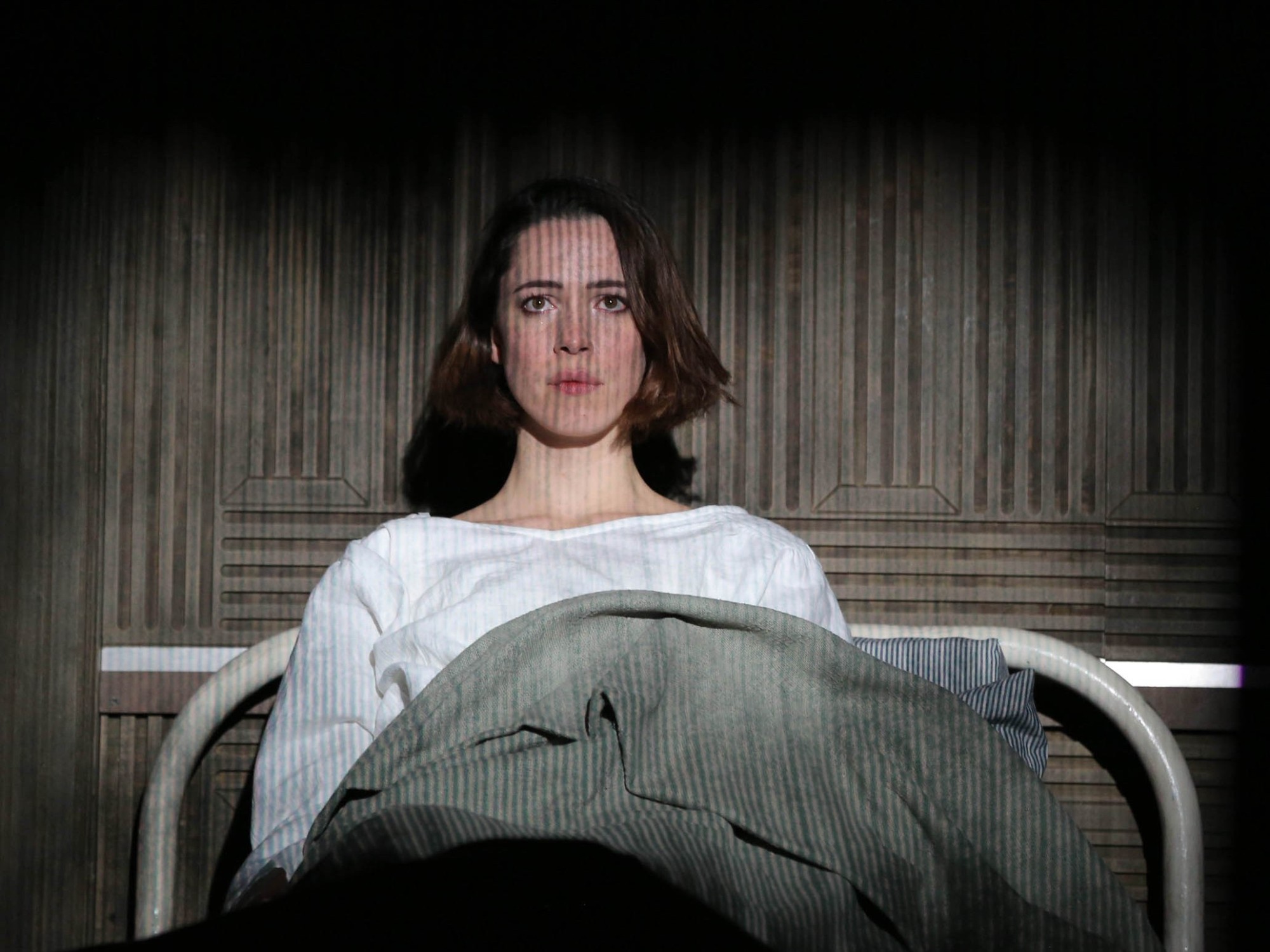 At the offices of the George H. Jones Company, platitudes rap out as quickly as the clickety-clack of the typewriters.  “Hot dog!” cries an office boy (Ryan Dinning) in response to nearly everything.  “Haste makes waste,” warns an elderly stenographer (Henny Russell).  And George H. Jones (Michael Cumpsty) himself informs all his employees, “The early bird catches the worm.”  This circus sounds like five unclever Rosalind Russells yapping nonstop, so it is no wonder that one of the secretaries, Helen (Rebecca Hall), feels like she is foundering in a life that has been set before it has begun.  George proposes, she reluctantly accepts in order to flee her hysterical mother (Suzanne Bertish), and a dazzling, life-size dollhouse of a set spins round and round as Helen descends deeper and deeper into what Betty Friedan called “the problem that has no name”: that is, the life of an intelligent woman suffocating in banal housewifery.  A baby, never seen onstage, brings more anxiety instead of love; a lover (Morgan Spector) brings the glimpse of freedom that leads to a breakdown.

Machinal is journalist Sophie Treadwell’s play inspired by the life of Ruth Synder, a matricidal tabloid sensation from the ‘twenties whose execution at Sing Sing provided the New York Daily News with an infamous photograph of death in the electric chair.  It is not a bad work, though it is largely unpleasant.  Helen is an almost entirely one-note character, vacillating between terrified silence and occasional, unbroken stream-of-consciousness monologues about her mental and emotional asphyxiation.  Ms. Hall, normally a strong actor, proves unengaging.  Mr. Cumpsty, on the other hand, brings welcome relief, even if it comes in the form of male ignorance and capitalist complacency.  “I understand women!” he announces proudly before deflowering his petrified bride.  In his only vulnerable moment—during which he still employs the voice of a radio announcer—he shares with Helen that it has always been a goal of his to purchase a Swiss watch in Switzerland, a watch “I bought right there.”  But Helen, George, and all the rest play more as types than fully formed characters—this is weak Ibsenist social drama instead of stark expressionist theater—and Treadwell hammers her point without much sympathy for her audience.

And while Machinal might have been stunning when it premiered in 1928, this is likely familiar territory to most members of a contemporary audience—an extended, unrelenting take on Charlotte Perkins Gilman’s “The Yellow Wallpaper.”  I wonder if the material would have a greater effect if it were not so monomaniacal, if it allowed more space for humor as well as pathos.  To my mind, Mary McCarthy’s novel The Group does the same job with more wit, more elegance, and more humanity.  I would turn to her instead.