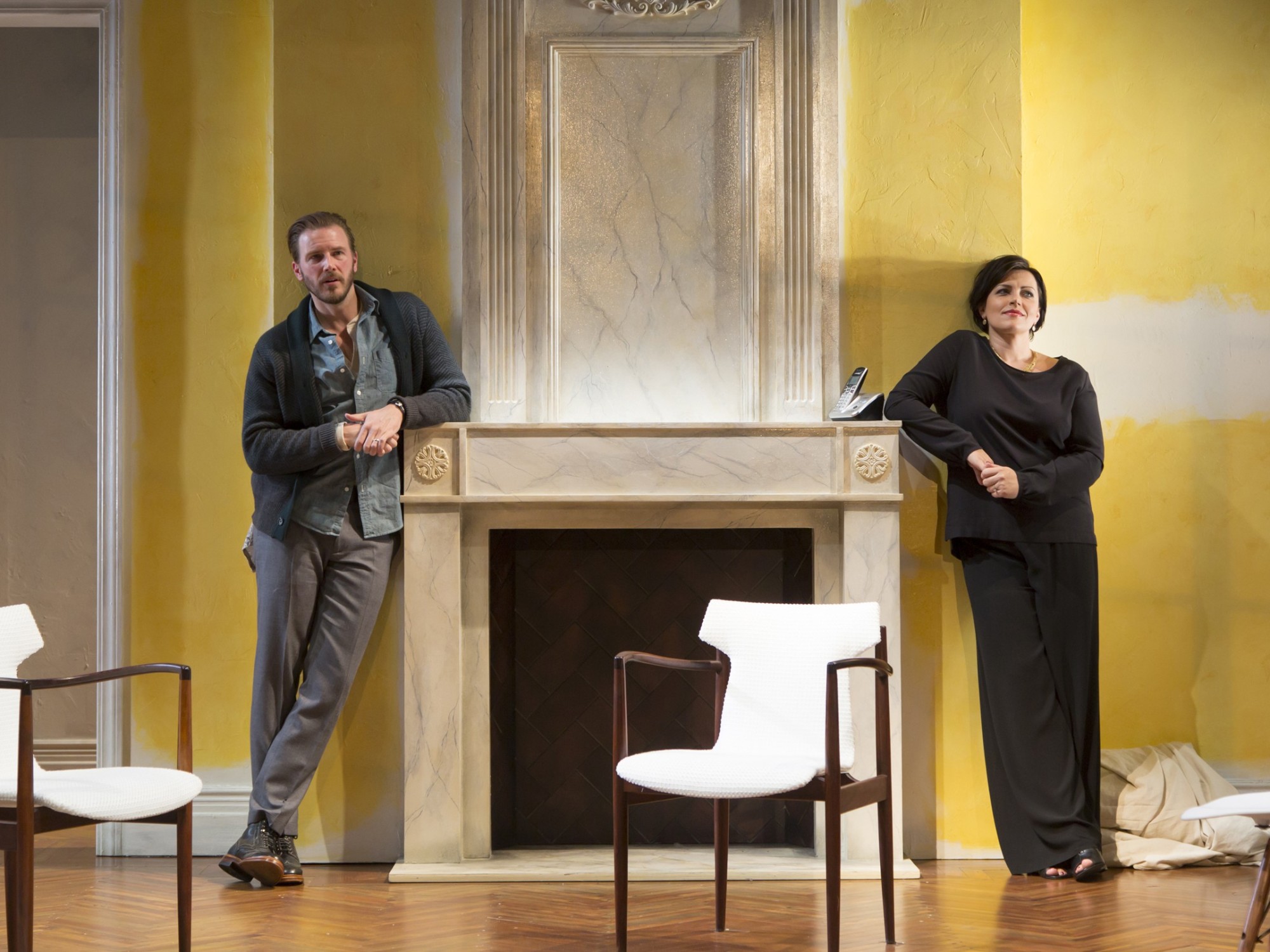 Contemporary American drama is a brittle affair, stuck in the shadow of Who’s Afraid of Virginia Woolf? for over fifty years now.  The number of works that begin with a stable upper-middle-class families and end in drunken dinners and secrets revealed, with witty and high-brow one-liners peppered throughout, has reached an agonizing level of self-parody.  These revelations—that one’s spouse is actually gay or racist or financially broken—have long lost their ability to unsettle bourgeois complacency, becoming complacent and bourgeois in their own right.  Occasionally, a playwright rejects this seemingly indestructible frame, and we get works like Branden Jacobs-Jenkins’ explosive An Octoroon or Naomi Wallace’s gorgeous memory play The Liquid Plain.

Which makes Ms. Wallace’s follow-up, Night Is a Room, all the more disappointing.  Liana (Dagmara Dominczyk), a senior account director for an advertising firm, decides to track down her adopted husband Marcus’ (Bill Heck) biological mother Doré (Ann Dowd) and reunite the two for his fortieth birthday.  Marcus is a hyper-sexual history teacher who speaks about his job and his all-female students in long monologues like this: “I want to see their faces crumple with doubt, with misgiving, disbelief, outrage; I want them to feel something other than recording the facts about medicine through time or the Holocaust, the American West, Hiroshima; to get behind the notes, to sense on their skin that the facts are as alive as they are. But it’s like a quagmire and each day I wade into it to retrieve the fucking actualities, dead and rotten and floating on the surface.”  That “fucking,” I suspect, was thrown in to suggest that these words might be spoken spontaneously by a person instead of by a writer who has gone through four drafts.  Liana jokingly refers to herself as an “Advert Whore” but appears proud of her professional accomplishments, her strong marriage, and her acumen in the kitchen.  Doré, who has lived in the same flat for forty-one years (nearly twice the length of her son’s marriage), is a markedly unsexual cleaning woman who skips the news but does the Sudoku at the back of the paper.

Naturally, the introduction of the familiar stranger illuminates and disrupts.  Long-held assumptions are challenged.  Puns, metaphors, and dialogue directed at no one in particular abound.  And the revelation is admittedly more shocking than the typical well-made play fare.  Still, the carrion of Mr. Albee’s model has offered slim rewards for quite some time, and Ms. Wallace is just too talented to play the role of the vulture.  This is the realm not of mature playwrights but of newly-minted M.F.A.s who are eager to show off their erudition but terrified of formal risks. (Incidentally, “Night is a room” is a line from William Carlos Williams’ “Complaint,” and if you didn’t know that, the entire text of the poem is reproduced in the Signature lobby with the relevant words in bold.)  All three actors are excellent, but do little to make the material anything but frustrating.  It is time we ditch George and Martha and start thinking seriously about the ways in which a twenty-first century American theater can strive for more than reheated leftovers.