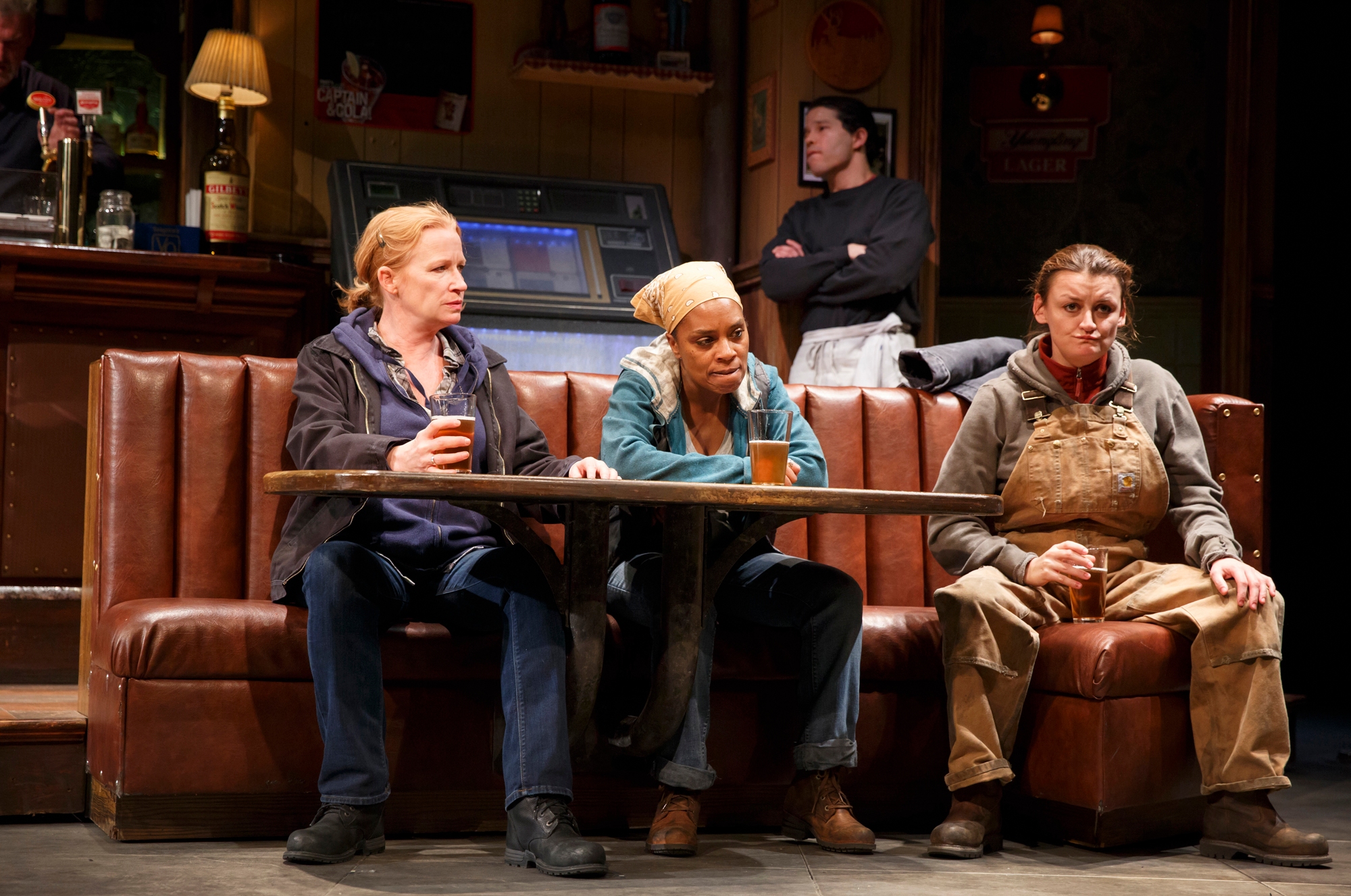 “We’ve been having the same conversation for twenty years,” Tracey (Johanna Day) complains early on in Lynn Nottage’s Sweat.  She and her friends, Cynthia (Michelle Wilson) and Jessie (Alison Wright), have worked in the same factory in Reading, Pennsylvania, since their teens.  Most of their fathers worked at the plant, too.

It’s early 2000.  Bush and Gore are running for the presidency, and nobody seems aware that having the same conversation in the same bar for twenty years is a luxury: NAFTA, increased outsourcing, and mechanization of jobs will force the factory to shutter its doors by 2008.  Flash-forwards inform us that Cynthia’s son, Chris (Khris Davis), and Tracey’s, Jason (Will Pullen), will be up for parole around that time.  Scenes of the two—one Black, one white—clinking beers and bragging about girls are juxtaposed with those of each wary and fearful of the other: in prison, Chris has found religion and Jason white nationalism.

Presiding over all of this is Stan (James Colby), the bartender whose injury on the job freed him from the prison of factory life.  This allows Stan the distance to see what is going on: management pits union members against scabs, citizens against immigrants (or perceived immigrants), all the while escaping blame for their own complicity in the decline of American industry.  But even he cannot prevent what is happening: when Cynthia is promoted, three decades of friendship is quickly replaced with class and racial resentment.  Speaking to Oscar (Carlo Alban), the American-born, Latino bar-back, and apparently unaware that racism has kept him out of a more stable line of work, Tracey complains, “I betcha they wanted a minority.  I’m not prejudice, but that’s how things are going these days.”  Even Stan has become disillusioned—he’s not voting: “No matter what lever I pull it will lead to disappointment.”  Appropriately, November 3 comes without any comment on November 2.  Still, I’m not sure Ms. Nottage would agree that the election is irrelevant: the latter date sees Chris and Jason committing the crime that will force them to check the “felony” box for the remainder of their working lives.

Obviously, Sweat is a play that is much-needed right now.  No doubt these characters, if they survive unemployment and addiction long enough, will vote for Trump in 2016.  But Ms. Nottage’s script is smart about politics, refusing hokey anachronisms and allowing her audience to make the connections between past and present.

Furthermore, our recurring sense of these characters is not that they are racist, xenophobic, or parochial: it’s that they are tired.  When Cynthia is promoted to management, she doesn’t crow about an increase in salary or responsibility; instead, she practically exhales, “I’m not wearing my Carhartt, not gonna be on my feet for 10 hours, I loosen my support belt, I don’t have to worry about my fingers cramping or the blood blister on my heel.”  Sweat is an indictment of an economic system that is unconcerned with company loyalty or with rewarding decades of literally back-breaking work.  Once the jobs are gone, they’re gone, and the residents of Reading are left to descend into crime and addiction.

The acting here is first-rate, and the language sensitive to the rhythms and concerns of the characters.  Ms. Nottage is rarely distracted by the kind of onerous monologues playwrights love to attach to precisely the kind of people who more frequently prefer monosyllabic conversation.  Sweat, down to its corporeal title, reminds us that art is concerned with what often gets lost in large-scale politics and economics: the human cost of progress.