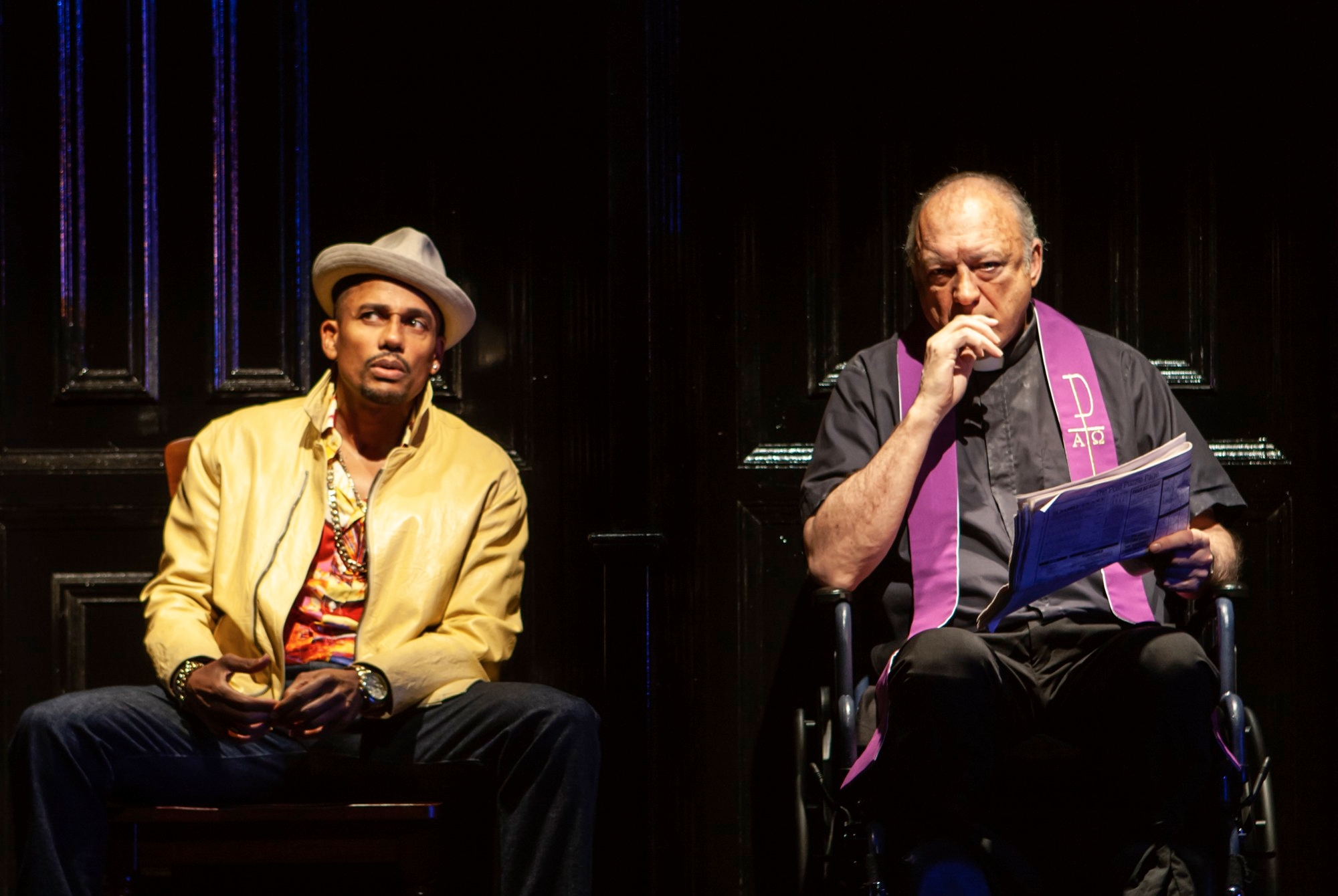 “What kinda fuckin’ world is this?”  So begins Stephen Adly Guirgis’ Our Lady of 121st Street, with Vic (John Procaccino) screaming in his underwear in the main viewing room of the Ortiz Funeral Home.  Sister Rose is to be buried the following day, but her body has gone missing.  Thus Vic’s consternation.

Sister Rose was by all accounts a legend in Harlem, a surrogate mother to generations of children who passed through her school.  Many of those children, now adults, have returned for her funeral: the DJ Rooftop (Hill Harper) and his ex-wife Inez (Quincy Tyler Bernstine); Flip (Jimonn Cole), a closeted lawyer who has escaped to Wisconsin; Edwin (Erick Betancourt), a building superintendent who takes care of his mentally disabled brother, Pinky (Maki Borden); Balthazar (Joey Auzenne), an alcoholic police officer; and Norca (Paola Lázaro), a former friend of Inez’s who slept with Rooftop while the two were still married.

Mr. Guirgis probably writes better dialogue than any contemporary dramatist—indeed, it often skirts close to poetry, with such flourishes as “It’s five a.m. in the morning”—and these are characters who want to talk: endlessly, rambunctiously, desperately.  When Balthazar asks Vic if he wants a nip to take the edge off, Vic replies, “I prefer to keep my edge on, pal,” which pretty much goes for everybody here.  Of course, while all talk, few are interested in listening, and even the local priest, Father Lux (John Doman), reads the newspaper and occasionally naps in the confessional.  Sister Rose herself was no angel—her death was brought on by drinking—and Mr. Guirgis, while not taking an explicitly religious position, seems concerned with the salvation of the damned.  “God spends a lot more time here than he does next door,” Father Lux says, referring to their bar and church.

The acting is terrific all around; this is a truly unbeatable cast that flawlessly captures the humor and near-vaudevillian speed of Mr. Giurgis’ writing.  Ms. Bernstine, one of our great stage actors, squints and rasps as Inez, a woman who is only just smart enough to ignore her ex-husband’s pleas for reconciliation, while Mr. Harper nicely balances the bravado and insecurity of Rooftop’s machismo.  And Mr. Borden, indefatigably cheery, walking everywhere belly-first, never condescends to Pinky, an easy pitfall for a lesser actor.  Our Lady is a play that lives or dies on its ensemble, and this production does not disappoint.  Whether its characters will find their peace, however, is left unanswered.  Like God, Mr. Giurgis remains silent on the question.