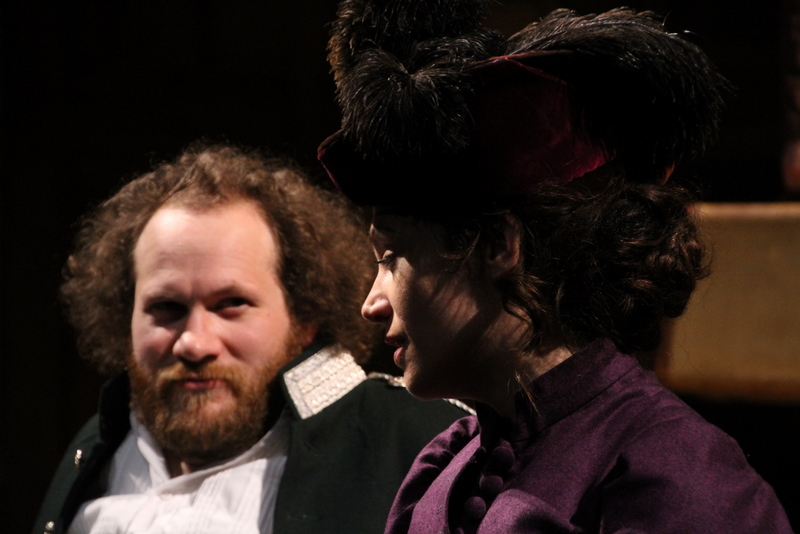 When we walk into the theater, there is man playing saloon music on a piano.  A woman passes out bags of peanuts, and Christopher Sly (Matthew Cowles), an old, drunken bum who has been tricked into thinking he is an aristocrat, loudly comments on the action of the play, so much so that the actors occasionally “break character” to quiet him down.  It is a gleefully lowbrow take on the opening of Olivier’s Henry V, but instead of framing it within a performance at the Globe Theater, director Arin Arbus has placed her Taming of the Shrew in the American West.  Though she never makes it clear why she has done this, it works nonetheless.  The biggest complaint about Shrew is its supposed sexism, and by drawing more attention to the fact that it is a play within a play—by continually reminding us that we are watching actors playing actors playing parts—Ms. Arbus forces us to look closer at the irony in Shakespeare’s writing and not accept the taming at face value.

Ms. Arbus quotes Harold Bloom in her production notes—“Kate and Petruchio … are clearly going to be the happiest married couple in Shakespeare”—so it is safe to bet that she has read his entire chapter on the play in which he argues that in her famous speech, Kate “is advising women how to rule absolutely, while feigning obedience” and furthermore, that by the end her will is “considerably more refined than it was at the play’s start.”  This production, rightly, seems to have been directed with Bloom’s book in hand at all times.  Kate (Maggie Siff) is played as a prisoner of her own personality, an hysteric who has no outlet for her intelligence until she meets Petruchio (Andy Grotelueschen).  In their first, punning exchange, she finds a man who can finally keep up with her, who will demand a great deal but who will also free her from the banality of her current situation.  Granted, there is a fair bit of suffering before they reach the marital “peace … and love and quiet life” of the final scene, but unlike the gushy romance of her sister, Kate leaves the stage without any lingering doubts or illusions.  There is a tendency to recast Kate as a tragic figure—political correctness has condemned her to the same fate as Shylock—so it is wonderful to see a production that can read the irony in Shakespeare.  A small thing to ask for, maybe, but it is surprising how frequently directors and their casts get it wrong.

Ms. Arbus’ cast is first-rate.  Ms. Siff is appropriately unbearable before intermission and perfectly delightful after, while Mr. Groteluschen, who was easily the best part of Fiasco’s shaky Cymbeline, once again proves that he is an excellent actor; he pounds around the stage, yelping and falling down with fine comic timing, but also knows how to turn it down during Petruchio’s more sober and insightful moments.  Furthermore, Saxon Palmer (Hortensio), wearing a John Waters moustache and Elton John sunglasses, brings a delicious seediness to his part; Mr. Cowles, too, is consistently delightful.

Theatre For a New Audience has had a fairly good season, but this, their final production, is easily its best.